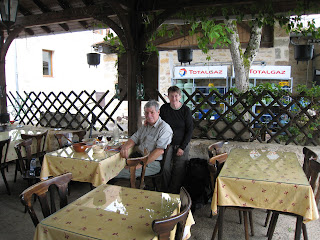 The photo show us at the restaurant in Faycelles where we had lunch on Friday. Just after taking the photo, we heard loud thunder and realized that the gathering clouds were going to require us to don all our rain gear. 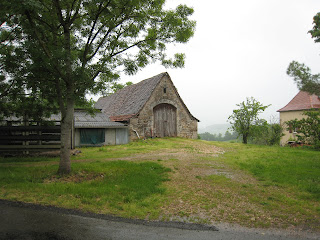 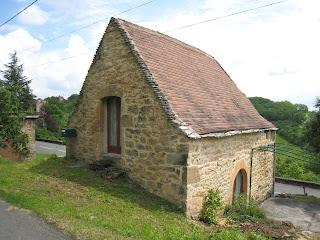 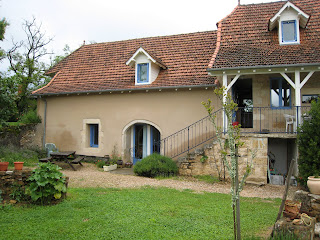 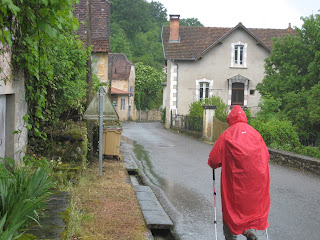 The photo of the little house shows the kinds of places we saw while walking through a town just outside of Faycelles. We also included a photo of a barn along the trail. You might notice the gathering clouds in the barn picture. They led to Russ' outfit in the one of the pictures. Just before we took the picture of him on the rain gear it was raining so hard that water was flowing over and into my shoes. In the photo of the chambre d'hotes at Mas de la Croix, our room was through the lower door. It was from the hosts there that I learned that pilgrims always stuff wet shoes and boots with newspapers because they draw off the wetness and help the boots dry. Sure enough, my shoes were almost dry by Saturday morning when we left after the hosts provided breakfast. They offered to drive us to a restaurant for pizza Friday night, but we opted to fall asleep....about 7:00.

Phyllis and Otis stayed at the same chambre d'hotes when they got to this part of the trail. Our hosts showed them our blog, which they hadn't had a chance to see before!
Posted by Peg at 5:41 AM