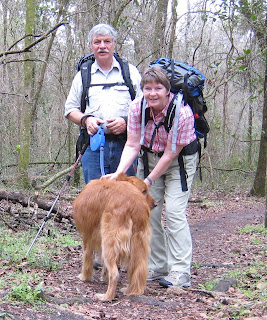 The Camino
It started last spring. Russ’ sister and her husband announced they were going to hike 250 miles on the 1000-year old pilgrimage trail, Camino de Santiago de Compostela. My reactions were shock, awe, envy.


They survived it. They loved it. This year we’re going to try it too. It is no small matter.

The trail has several alternate routes starting in various European countries and ending at Santiago. We want to try part of the most popular French route and part of the most popular Spanish route. We plan to start in Figeac and walk about 100 miles to Moissac. Then we will take a train to St Jean Pied de Port at the foot of the Pyrenees to start the next section.
Starting last September, we began to train and lose weight. Thirty pounds later, with two and a half months to go, we do two training walks a week of about 5 or 6 miles, and one 10- to 12-miler, the latter with a loaded backpack. Neither of us has collapsed yet, although collapse has felt close on my heels a few times.

I bought an overly good (pricey) backpack. It is a Granite Gear Nimbus Meridian. I got it at Brasington’s, Gainesville’s Outdoor Adventure Outfitter. First I ordered an Osprey…special for women. But the hip belt didn’t really fit comfortably. So I went for the Granite Gear. I have hiked with it four times now. From the start, it had a bit of a squeak in the back. But last week it squawked for 11 miles. I walked into Brasington’s with it. The clerk asked how he could help. I said: I got this pack a couple of weeks ago and…”It squeaks,” said he. “I heard it when you walked in the door.” He fixed it. Sometimes it is nice to not have bought online. 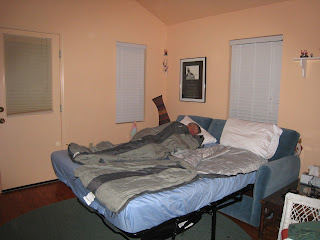 We now own waterproof jackets and pants, Atmospheric Rain Capes that we ordered from Spain to cover our packs and us, boots for training and boots for hiking, hiking socks and sock liners, high-tech pants and shirts, sweaters, pjs, and underwear…all of which dry in the blink of an eye. We have 1.5 pound sleeping bags that will keep us warm in 45 degrees. At least that is the claim. Tonight we are going to stay in the Cedar Key house. We bought a sleeper sofa and want to try it out for the comfort of future guests. But also, it is supposed to go down to 31 degrees. We plan to turn off the heat when we go to bed and sleep in our new sleeping bags. We’ll see!

We have books and gazillions of bookmarked websites telling us where to stay and how to get the most from the experience of pilgrims-past, including the secular ones like us.
Our mentors are off to the American Pilgrims of the Camino Gathering this week in Santa Barbara. There actually is such an organization. We thought about going too, but I got summoned to jury duty Monday and we would not have been back in time…besides the flights cost too much.

Our current plan is to fly to Toulouse…we already bought those tickets…leaving the dog and house in the care of a friend. We will train to Figeac and start hiking. We hope to make it to Moissac in 7 days. Then we’ll take public transportation, cross the Pyrenees at St Jean Pied de Port, and start hiking again from Roncevalles in Spain. We hope to arrive in 7 days in Logrono. From there we’ll again take public transportation to Barcelona and meet up with friends for a few days before returning home.
But we know plans change.

Brrrr....
I hope it does not really get cold in France, or at least that they have some blankets we can rent. At about 4 AM I proclaimed an end to our sleeping bags test and turned on the thermostat. Still, they’ll almost surely be just the right bags; they are wonderfully light and we do not really expect it to be below 50 indoors.
Trekking requires optimism.

Being Committed to the Camino
I am totally committed to walking this walk. Some days, on the other hand, I am not sure that it will be fun. Maybe it will be a great thing to have done, but only for the bragging rights…like riding the mules down the Grand Canyon.

I know we can do it, if we don’t get an injury, which could happen any time any where, so really doesn’t factor into the thinking.

In the beginning, it just sounded like a cool idea to me. Then for a while I thought it seemed a bit extreme, especially the backpack part. But the more we walk and the more we buy stuff, I have no doubt about doing this.

I am usually a reluctant shopper. But shopping for this has been really fun. When it gets finalized, I will tell you what I am putting in my pack, and how much it weighs. I really want to keep to not more than 15 pounds…so I may have to jettison some necessities. Maybe I can live with a comb and no brush…saves an ounce! 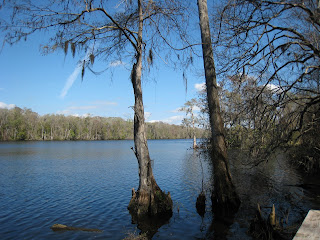 We have found some beautiful places to train. This picture is from a trail in the Lower Suwanee National Wildlife Refuge, near Cedar Key FL. 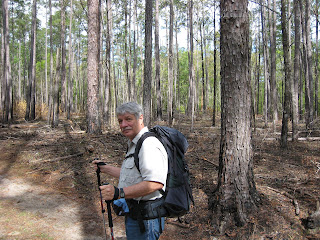 Another of our favorite spots is the San Felasco Hammock. They did a controlled burn this week, it it is still lovely.

Training and Logistics
Only two more reservations to go. We will be on the Camino for 18 nights. We had heard that you need to reserve ahead in France, but we thought that in Spain it would not be possible. Then we learned that lots of people start hiking in St Jean Pied de Port, where we will start for Spain. So the refugios and albergues get full on that part of the trail. We decided to go ahead and reserve at places that, unlike the pilgrim refugios, will accept reservations. The thought of walking 12 or 15 miles and then finding no beds at the inn was too scary for us.


We did a 5-mile training walk today. Trusty Jake, the Golden Retriever, hiked along too. Five miles is about his limit, especially as it gets hot in Florida’s April, but today was cloudy and he did fine.
Posted by Peg at 3:05 PM