Monastery life has its idiosyncracies. The place is HUGE...at least 200 rooms. But we have seen few people...10 or so at breakfast and a few others in the dark hallways. No one else was on our 30-room corridor last night and we thought we were alone in the whole place until we heard water in the pipes...in fact this morning when someone upstairs was showering it sounded like all the water was running through the wall near our heads!

One woman seems to run the whole place. She took our phone reservation, showed us to our room, cooked and served the breaskfast, and made up the room. Of course, if that´s true, she doesn´t really want to fill all the rooms.

It has rained constantly since we arrived. Today we had planned to take a bus to Finisterre at the ocean...the énd of the earth.´ It has been a pilgrim destination even for the Romans and ancient peoples because it is the most western spot where the sun sets. We hear it is beautiful. But it is raining so hard that we wouldn´t be able to see anything except the fog on the bus windows and the fog on the ocean when we arrived. So we are doing the few museums that are open on Mondays. The Camino is about accepting the weather and doing what it allows. 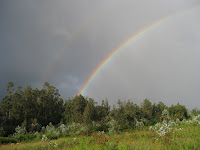 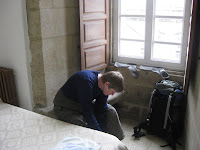