Unbelievable...another fantastic hiking day! The sun is bright, the paramo is welcomingly flat. Along the trail we have irrigated fields of corn, wheat, potatoes, turnips...most just coming up. The mountains are in the distance and have snow on them...but hopefully those are not the very ones we will trek over.

Last night we met three pilgrims at dinner. Graham from the UK, Marian from Atlanta, and Lucia from Turin, Italy. Each is hiking alone. Marian said she´'d come to Spain on a tour 9 years ago and learned about the Camino. She's been wanting to do it ever since. Next year is a Holy Year...when the Feast of Santiago falls on a Sunday...and 300,000 are expected to do the Camino. So she decided to come this year with fewer people. But there are lots of people and the thought among the pilgrims is that many had the same idea as Marian.

Lucia is a mountain hiker. He has been hiking about about 25 to 30 miles a day on the Camino. He started in France, at St Jean Pied de Port, and came over the Pyrenees on the Napoleon Route the first week in May. It snowed!!! He said people were crying along the trail... they were so cold. Hard to believe you'd hike up the Pyrenees in a snow storm!

Now we are in Orbigo, staying at this wonderful inn www.elcaminero.es


The photos show the Bridge here in Orbigo, the restaurant at our inn Tio Pepe, Storks nesting on a church tower, and a group of kids we saw crossing the street. Notice..you'll need to double click to enlarge...that they are in a 'chain gang.' 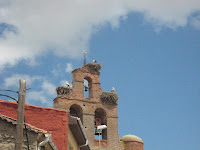 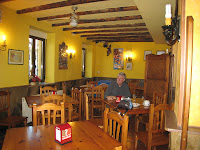 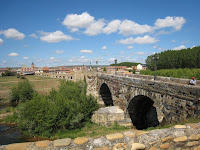 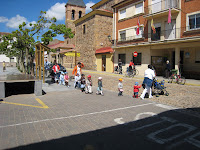 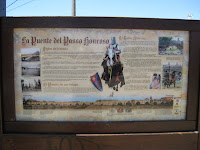