Yesterday we started out from Leon after having been blessed by the Domincan Sisters at the Monastery the night before in a Pilgrim Blessing. We´ll post a photo of the crowd when we get home. The one we took needs a bit of poto shopping to ligten it up for posting. More than 100 were there and we think we were the only Americans.

The hike from Leon was a city hike, through the outskirts until we reached our destination...La Virgen del Camino. We stopped at a little inn and spent the rest of the day resting and seeing the sights.

We met up with a Dominican priest who gave us a tour of the church. We learned from him that the Pilgrim Alberque/hostel, where we were not staying, had originally been a residential elementary school for children of emigrants who went to Mexico to work in beer factories. 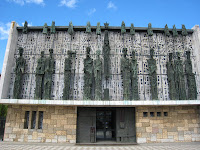 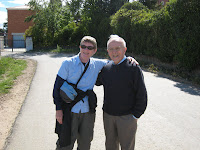 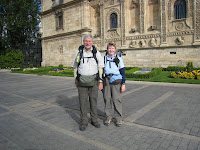 Today was a breezy, sunny, gradual climb on the paramo, the high plain that makes up this part of the country. We expected a bit more desolate look, but it was actually green, open, and lovely.

The first three photos show us leaving Leon, me with our Dominican friend, and the 12 apostles with the Virgin floating above them on the front of the church in La Virgen where she is said to have appeared to a peasant causing the original church to be built.


We are staying in Mazarife at Tio Pepe, an inn with a total of 20 beds. We have a private room, but other rooms are 4 person dormitories with bunk beds. All the rooms are small and when there are four to a room, the gear doesn´t all fit in, so there are backpacks in the hallways.

We have been chatting with other pilgrims, although most speak only German, so we are seeking out the Canadians. Lots of nice folks.
The photos show the trail today, helping a pilgrim who fell, and doing the laundry. 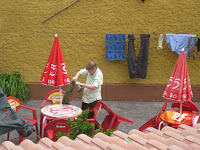 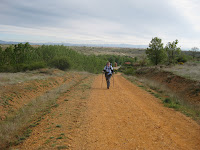 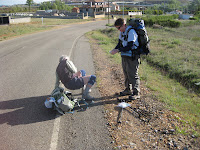 It's nice to hear that you are having a great time on the Camino and that the weather is cooperating. We'll follow your progress as it unfolds. We had a wonderful time in all sorts of weather in Scotland. Sorry that we are not meeting with you at the end of this trip. Arnold and Ismini

So excited for you! I love the updates already. Good luck! I look forward to seeing Camino through your eyes! ~Nickie